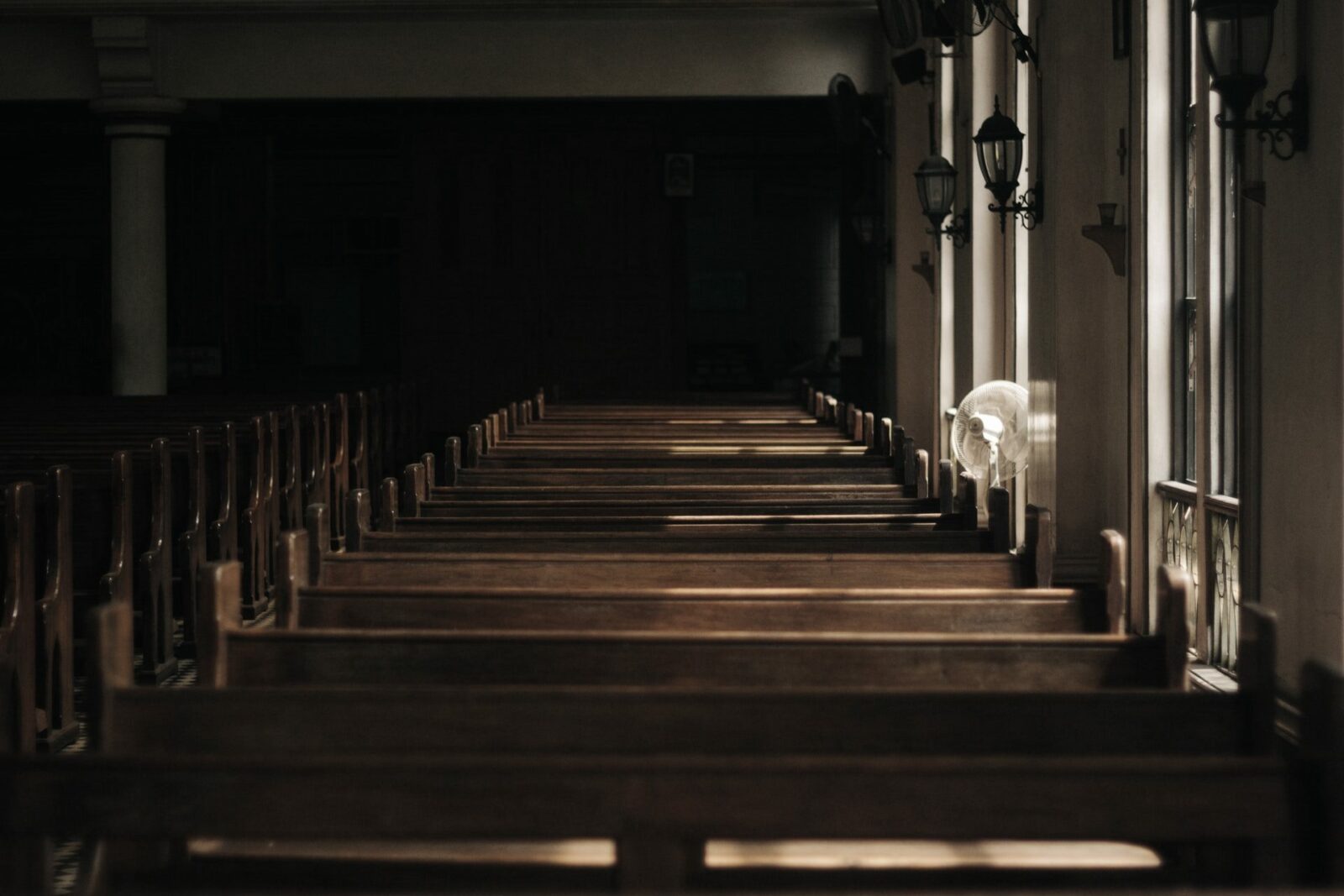 I wrote this in my journal at the age of 17 and meant every passionate word about my Christian faith. Never could I have imagined back then that, ten years later, I would no longer call myself a Christian.

This drastic change in my beliefs can’t be attributed to never having been a real Christian to begin with; in fact, the opposite couldn’t be truer. I accepted Jesus as my savior at the age of 13, and my life changed drastically from the inside out. I was baptized at 16, went on a mission trip with my high school youth group, created elaborate artwork inspired by my faith, attended countless retreats and Christian small groups, chose to attend a Christian college, and served as a chaplain in my college residence hall—all as an outflow of my heartfelt relationship with Jesus.

My baptism, plus some of the artwork I created inspired by my Christian faith.

How is it possible, then, that someone who built her entire life around her faith could somehow walk away from it?

The answer is deconstruction: the process of reevaluating one’s core beliefs. To those strong in their faith, the idea of deconstructing one’s relationship with Jesus may seem absurd, if not altogether unfathomable. But as growing numbers of people are leaving organized religion, it’s imperative Christians become familiar with deconstruction—how it happens, what triggers it, and how to empathize with those who experience it. This is exactly what I hope to shed light on by breaking down my own deconstruction journey that took me from a passionate follower of Jesus to abandoning my evangelical Christian faith.

It should be noted that every deconstruction is individualized, and my experience is just one unique example. Additionally, while numerous factors contributed to my deconstruction, I’ve broken down my story into the nine major “stages” I’ve moved through so far in my journey that have brought me to where I am today.

I was born a thinker. I’ve never been one to accept easy answers, and am energized by engaging in soulful, genuine conversations with others. These aspects of my personality have been common threads running through every part of my story and act as a sort of compass, guiding me toward choices that honor my analytic and authenticity-craving self.

I attended a small Christian liberal arts college that I specifically picked for its palpable close-knit Christian community. Majoring in psychology with a minor in theology, I took classes like learning and thinking, health psychology, doctrines of the Christian faith, history of Christian thought, God and evil, philosophy, and ethics.

While my faith grew immensely in college, so did my critical thinking abilities thanks mostly to my philosophy and theology classes. My professors rarely accepted “easy” answers and were always challenging students (playing devil’s advocate was a favorite teaching method) to ask hard questions.

“You challenged me to ask myself questions about my faith and my beliefs that uncovered the holes in my theology,” I wrote in a thank-you letter to one of my theology professors upon graduating. “You exposed places of weakness in modern Christian thought that many Christians are ignorant of or try to downright ignore.”

In order to graduate, my college required all students to participate in a cross-cultural experience abroad. My junior year, I chose to spend three weeks in Cambodia immersed in the country’s culture and history. It’s hard to describe concisely how much my time in Cambodia taught me, but suffice to say this trip raised many questions for me about philosophy, theology, and Americanized Christianity.

Learning firsthand about Cambodia’s genocide during the 1970s was particularly haunting. I could not un-see the rows of hundreds of prisoners’ photographs while touring the grounds of a former torture camp, or comprehend where God was while gazing up at a memorial monument stacked high with thousands of human skulls. I left Cambodia with my eyes opened in a way they never had been before.

After my graduation from college, I was excited to be hired for my first “real” job working as a mental health aide at a psychiatric hospital. It was a seemingly perfect fit given my degree, and I sincerely believed Jesus had aligned the circumstances for me to get this position. Halfway through my first day of on-the-job training, however, every fiber of my being knew the position was NOT for me.

I quit my mental health aide job after that first day and felt as if God had dropped a bomb on my understanding of him. How could everything I put into getting this job that I thought he wanted me to have turn out blowing up in my face? In the weeks to come, I’d write in my journal, “I feel like I’m going through a dramatic season of disillusionment about what life and this world really are.” The crevices of questions in my faith and worldview at this point began to split into cracks of despairing doubt.

As I’ve shared in other posts and on my YouTube channel, I spent two and a half years in a complicated relationship with someone I met in college. I believed it had been confirmed to me for certain by God that this individual was the person God wanted me to marry. This relationship, though, would turn out to deal the biggest blow to my unsteady faith.

To make a long story short, my boyfriend at I were stuck dating long distance indefinitely, and I struggled a lot with situational depression after college largely due to this. Ultimately, I felt I had to choose between God’s supposed choice of husband for me or my mental health. I chose the latter, and not long after my first job failed, I broke off this relationship. This only prompted further questions about my faith, as reflected in this journal entry I wrote during that time:

Following the breakup with my ex, my depression worsened. Life felt meaningless, and I began having moments of feeling like I didn’t want to live anymore. I turned to God for help, begging him to take away my depression, but to no effect.

My understanding of God—and consequently my entire identity and life’s purpose—had fallen apart, and I didn’t know how to fix it. I started seeing the world through an organic lens as opposed to a religious one, and began asking philosophical questions like Why are things the way they are? Where do our social and cultural rules come from? Why am I here? What is the best way to live? Who says what the best way is to live, and where does this standard get its authority from?

Through this dark period, my empathy for others grew—especially for people who, like me, found themselves in circumstances they never asked for. This included two groups I had frequently seen ostracized by evangelical Christians: those with mental illness and those in the LGBTQ+ community. I couldn’t understand how the Church could justify shaming people for who they were.

With my former understanding of God in shambles, I found a Christian small group of like-minded individuals who had also outgrown their views of God and were asking tough questions about faith. In the almost year I was part of this group, I was able to start addressing my cognitive dissonance, grow in self-awareness, and build a positive self-image completely distinct from my former Christian-centered identity. As time went on, however, I felt my ever-evolving questions became too heretical for even this more progressive Christian group.

In the spring following my breakup with my ex, I met my now-husband. Unlike me with my conservative evangelical roots, my husband came from a Catholic background and later shifted to Lutheranism. The role faith played in each of our lives was starkly different, and for the first time I realized evangelicalism is not the only valid way to be a Christian, although the evangelicalism I knew had always boasted otherwise.

My relationship with my husband while we were dating was also entirely different in that, unlike my previous relationship, ours was not controlled by strict evangelical rules regarding sexuality. Through meeting my husband, I began scrutinizing my former views on dating and sex, while simultaneously realizing how damaging those past views had been to me.

No longer feeling like I belonged in any of my former Christian circles, I was able to find a life coach who helped me put a name to what I was going through: deconstruction. I finally felt like I had a space to process everything I didn’t feel safe sharing anymore with my Christian friends and family members. With the help and permission of my life coach, I started diving deep into my more troubling questions, and my eyes were opened to parts of my faith that were not just hurtful, but outright toxic.

Besides working with my life coach, I’ve found multiple online communities of individuals like me who have or are currently deconstructing their Christian faiths. Perhaps one of the greatest sources of hope I’ve found since my relationship with God unraveled is knowing I’m not alone in this rough and unexpected journey.

Through deconstruction Facebook groups, YouTube videos, Instagram posts, and Twitter hashtags, my experiences and my personhood have been validated. I’ve discovered resources and language specifically for people like me who have found themselves rethinking the worldviews we’ve built our entire lives on. Through the stories of others, I’ve recognized parts of my past in which my faith in Jesus was used to manipulate me, and how evangelicalism is a valid source of trauma for many sincere believers.

Where We Go From Here

Deconstruction has been the loneliest and most painful experience of my life, and it happened gradually over the course of multiple years. My hope in sharing my story of deconstruction is that you won’t see those who’ve walked away from Jesus as backsliders or false believers, but rather as real people with real stories. Those of us who deconstruct often didn’t choose this path, but are just trying to make sense of a reality and a worldview that no longer align.

The most loving thing you can do for someone deconstructing? Listen their story and affirm their experience, regardless of what your own faith journey has looked like.

If you’re interested in learning more about deconstruction, I’d encourage you to check out my list of recommended resources. You can also head over to my YouTube channel or peruse my playlist of top-picked videos on the subject of religion.